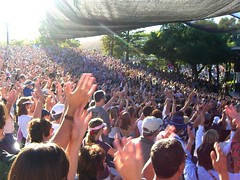 "So other than paying the price for eating very spicy food at Spices III, and you know... buying an iPhone, what happened at the weekend Greg" I hear you asking... quietly, just on the edge of hearing.

I saw the Village People.

Yes, that group of cos-players, the ex-boy-band, the macho macho men. Those Village People.

They were playing at the Alameda county fair, so how could we pass that up? Watching (and er.. participating in) several thousand people doing YMCA was fantastic. The group also rocks and are more entertaining than many groups half their age. Lots of pure fun.

Something of an awesome weekend....
Collapse