Tomorrow is November 11th, and it was on this day, the best part of a century ago now, that the Great War was officially ended. It is now the day we remember, and respect, those who have fought, and fallen, in battle.

In honor of these men and women, and to remember my personal connection with the war, I present the diary of my great-grandfather. Not the one who you may have seen in my restored photos, but the other side of my family. I transcribed his diary before I left the UK. He wrote it after the war, but while the events were fresh in his mind.

I'll be serializing it in 3 parts here and my main site over this weekend, the story is equal parts informative, horrific, and illuminating. Here is the beginning.

The Diary of George Frederick Cobb.

Commencing Nov 9th 1914.
Made up my mind to enlist & joined the Kings Own Yorkshire Light Infantry on the above date. I had six chums with me & we were sent to Pontefract where we stayed until Nov 18th when they asked for volunteers to transfer into the Yorkshire Reg. commonly known as the Green Howards & being fed up with Ponte – we transferred & were forthwith sent to Darlington where we commenced training in earnest & on the whole we didn’t have a bad time but I must mention the fact that while here we broke the record for marching for Kitcheners Army doing 49 mile in on day with only one casualty which happened to be the big drum.

On March the 7th I came back from the Machine Gun School after six weeks at Durham & was sent on my final leave as I had been warned to proceed with draft to the Dardnelles on May 20th & we left Darlington by the 7-15PM train on that date being given a hearty send off. We were going to Devonport where we arrived on Tues May 21st at 10am but on the way we had stopped at two places, Swindon & Exeter, where we had some buns & cocoa which were provided by the Mayor & Mayoress. At 3PM we boarded the S.S. Borda & set sail at 6PM having an escort of 4 torpedo boat destroyers & had a fair voyage until we got to Malta where we arrived on May 31st. 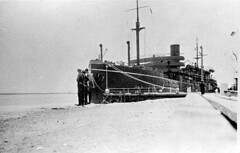 The SS Borda
We stayed here for 10 hours to land some R.A.M.C. men & cargo. At 6PM on the 1st we left Malta & got our first bit of real excitement. We were chased by a submarine & about 6 hours traveling found us where we had started but we set off again & had a bit better luck this time & we arrived in harbour at Lemnos which proved to be a Greek Island at 7⋅20PM on the 4th of April, but did not land until the 6th as the sea was too rough.

However on the 6th we landed & marched to West Mudros a village if I may so call it, as there were only about twenty houses of which the Greeks were the inhabitants. This village was a distance of four miles from the quay side & I can tell you it was some march in the blazing sun & by the time we reached it we were all about done up & hungry but all we got was Bully Beef & biscuits & by what I could see we were faced with the prospect of nothing else during our stay here as boxed of both were stacked up all over the place.

At about 7PM we were given a blanket & told that as the tents were already overcrowded we should have to sleep out until we had put some up for ourselves however we didn’t mind seeing how hot it was but had we known I think there would have been a protest for during the night it turned bitterly cold & to make matters worse a cyclone came on * unless you have seen on you cannot possibly realise what it is like. It fairly chucked down with rain & the hurricane was tossing boxes of biscuits about like paper & by the time morning came we were all thoroughly fed up not to say soaked to the skin & nothing to change into & we were all wishing the Kaiser, well I will leave you to guess as it wouldn’t do to put it in ink.

On the 7th & 8th we were pitching tents but we didn’t get into them until the 9th & during the afternoon we were on fatigue unloading a boat load of biscuits but I got out of this about half an hour after we started as I had a nail went right through my thumb & I was out of action for a couple of days.

On the 12th Aug 1915 we received orders to go up the line & we receive our first dose of firing from the Turks on the night of this date. We started as we were entering the trenches on 7⋅20PM & kept rapid fire up until 12 o’clock & after that we only got an occasional shell now & again until four o’clock when all was quiet for the rest of the day & no one would have know there was a war on but for the surroundings which were very desolate.

On the night of the 13th & 14th we were suddenly startled by the sound of heavy gunfire coming from the sea which started about 11 o’clock & shells were seen to burst all along the Turkish line. This was kept up until just before daybreak when our ships withdrew. The day of the 14th was quiet except for bursts of Machine Gun fire. In the night of the 14th⋅15th I was sent out with two other men to cut the grass which was growing to a good height in front of one of our advanced posts. I was here very lucky as we had only been out about twenty minutes when all of a sudden a Machine Gun got us first time & I aw the two who were with me roll over & I soon found out that they were hit & how I missed being hit I don’t know but I had already found out it was a game of chance. I found it was useless trying to get them back by myself as one was hit in the chest & the other in the ankle & the one who was hit in the ankle had let up a yell & the Turks were making it pretty hot around that quarter so I crawled back to get help & we succeeded in getting them in but the one ho was bit in the chest died on the way to the dressing station. All went well until the 16th when we were relieved by the Dorsets & we came down to the beach for a rest.